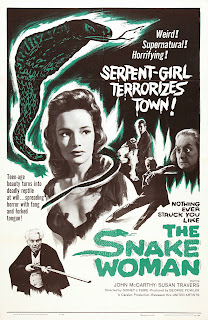 MGM/Timeless Media Group. D: Sydney J. Furie.  In a rural community, a herpetologist injects his pregnant invalid wife with King Cobra venom to cure her insanity.  The wife's anxiety over the venom's affect on her unborn daughter foreshadows the film's premise when she gives birth to a cold, clammy, unblinking baby.  The mother doesn't survive the traumatic premature delivery and the villagers storm the scientist's lab where he is engulfed in flames along with his scaly specimens.  Soon after, the baby girl goes missing.  Years later, a rash of mysterious cobra bites in the village catch the attention of Scotland Yard who send their best man (John McCarthy of DR. STRANGELOVE) to investigate.  Predictably, the detective meets the alluring, all-grown-up serpent vixen (Susan Travers of THE ABOMINABLE DR. PHIBES, PEEPING TOM) and tries to save her from the wrath of the angry, torch-wielding townsfolk.

The film's screenplay makes the ridiculous mistake of believing that a cold-blooded animal is actually ice cold to the touch!  Obviously hoping to ride the wave of success that Hammer studios were enjoying, this black-and-white programmer blatantly misses all the cues that would insure even the slightest spark of box office fire.  The script is clumsy, overly-talkative and there is practically no action to allieviate the plodding pace.  Any potential thrills or chills are merely talked about amongst the characters.  Most annoying is the repetitive structural device whereby an event plays out and the characters verbally reiterate it in the proceeding scene.

All the characters are really dumb and the disappointing, abrupt wrap-up is trite as hell!  This film had all of the basic production elements for a competent effort but the screenplay and direction annihilate any chance of that.  Hammer took a similar premise and not much more budget to create the enjoyable and colorful THE REPTILE (1966).   Director Furie (DOCTOR BLOOD'S COFFIN) went on to make real studio movies like THE IPCRESS FILE,  LADY SINGS THE BLUES, SUPERMAN IV and others.  The DVD quality is sharp and clean with a 1.66 letterboxed image inside the 4x3 frame.  On the same quadruple feature disc as THE FACE OF MARBLE (see below).
Posted by mormovies at 2:30 PM