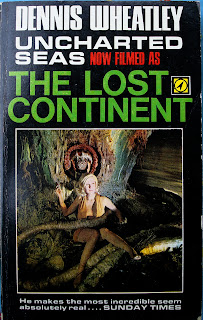 Arrow Books (U.K.) 1968 movie tie-in edition.
Navigating the haunted, mist shrouded seas of the Sargasso, dark waters previously mapped to chilling effect by author William Hope Hodgson (1877-1918), Dennis Wheatley (1897-1977) fashions a taut ‘ghost ship’ pulp thriller of his own.  En route from to , a Danish steamer carries a cargo of eccentric characters, each revealing melodramatic back stories that explain their geographical and/or psychological motives to escape.  When the ship is ravaged and sunk during a sudden violent storm, the few survivors drift aimlessly at sea in a life boat with limited rations.
Predictably, personalities clash and tensions mount, and just before cannibalism becomes an option, a ship is sighted in the distance.  The group’s raised hopes are shattered when they discover its their old ship, mysteriously afloat and trapped in a maze of sinister, sinewy seaweed.  Soon, they encounter two factions of descendents of previous shipwreck survivors.  The natives are all prisoners of the mutant mass of seaweed and inhabit two tiny islands in a string of three.  One island is not suitable for human habitation since its infested with monster crabs!.  For better or worse, the other isle is infested by gangs of violent, sex-starved African ex-slaves who occasionally abduct Caucasian females for breeding purposes from the third island, a proto-hippy, peace loving, sexually liberated utopian state set up by European castaways and pirates.  Travel between the islands is achieved via stilts buoyed by gas balloons to hop-scotch around the thrusting deadly tentacles of man-eating octopi beneath the floating weed!
The constant ugly undercurrent of racism that simmers below the plotline comes to full boil during the bizarre, climatic third act when a daring rescue mission is staged to save two girls from the horrors of a slave island ritual gangbang (sounds like fun)!  After the inevitable blood-bath, the few surviving characters are miraculously faced with the choice of sailing back to civilization or remaining and joining the horny European island community (decisions, decisions…).   The novel spews a steady stream of cringe-worthy racial slurs (N-bombs anyone?), ethnic stereotypes, alcoholism, free sex, blackmail, ravenous devil fish, mean jumbo crabs and gratuitous nautical jargon and silly love poems!
Overall, UNCHARTED SEAS is a frivolous, fun, quick read (a fraction of the page count of the typical weighty Wheatley tome!) but not up to snuff with the author’s better known work.  The book was Wheatley’s third to be adapted to the big screen as LOST CONTINENT (1968) and the first of three projects for Hammer Productions.  (The other two were based on the black magic classics THE DEVIL RIDES OUT and TO THE DEVIL- A DAUGHTER); none of which were huge hits.  While the movie credits Michael Carreras as director, the paperback credits Norman Leslie (X- THE UNKNOWN).  The Anchor Bay DVD is currently out of print and goes for crazy clams.
The prolific Wheatley is mostly known today for his numerous occult thrillers featuring his hero Duc de Richeleau as well as a vast library of historical and adventure epics as well as non-fiction efforts such as THE DEVIL AND ALL HIS WORKS.  Sadly, virtually all of his work is out of print in the   Sidenote:  Like fellow scribe Ian Fleming, Wheatley was one of the creative masterminds behind British Intelligence during WWII and both authors had connections to infamous occultist Aleister Crowley.  Now there’s a movie! 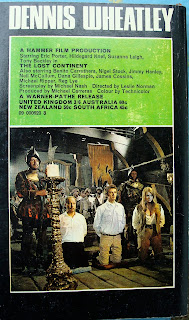